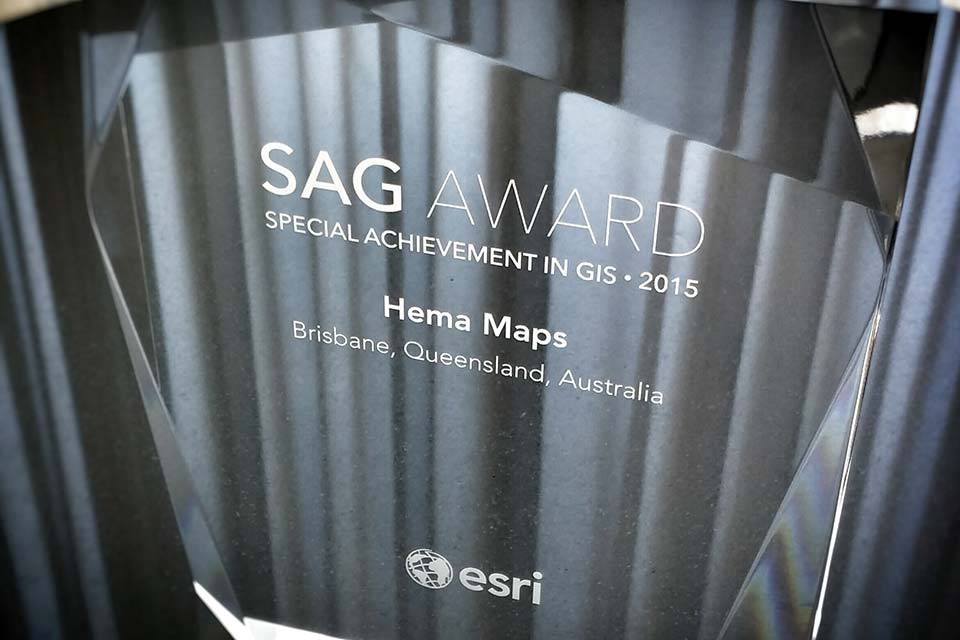 Esri is the leading supplier of Geographic Information Systems (GIS) software globally, with the SAG Award acknowledging vision, leadership, hard work and innovation from companies using Esri products. The award is presented each year at the Esri International User Conference, one of the industry’s biggest events, in front of thousands of industry professionals.

Hema Maps received the SAG Award for its upcoming Hema Explorer Map, which combines Hema’s entire mapping database of roads and 4WD tracks in a multi-scale digital map of Australia. The first map of its kind for adventure travel in Australia, the Hema Explorer Map is an ambitious step forward for Hema Maps, with the SAG Award recognising the work and planning that has gone into the two-year project.

"The SAG Awards identify the organisations and people who are using the power of geography to make our world a better place," says Esri president Jack Dangermond. "At Esri, we are always deeply inspired by the passion and innovation of our users. They deserve recognition for their invaluable contributions to their communities and the continued evolution of geographic science.”

The Hema Explorer Map is an ongoing project that it is on track to be completed before the end of 2015, after which it will be implemented in various Hema digital products. Designed for guiding adventure travel, it features content for campers, four-wheel drivers, tourers and road trippers, as well as to facilitate activities like geocaching and orienteering. The map itself is comprised of numerous layers, creating a fluid user interface with which users can zoom from an Australia-wide view down to street level detail seamlessly. With an immersive user interface and more detail than any previous Hema map, the Hema Explorer Map, once released, will make trip planning easier and real-time navigation more precise for travellers.

“The Hema Explorer Map is our most exciting digital project ever, both from a technical perspective and for what it will do for our users, and we’re honoured that this willingness to innovate has been recognised by our peers in the GIS world,” said Rob Boegheim, Hema’s managing director.

The SAG Award is also recognition of Hema’s restructured mapping database, which was overhauled to create the foundation for the Hema Explorer Map and speed up the production of new maps, both digital and printed.

More information on the Hema Explorer Map will be made available closer to its official release date.

Interview with the Hema Map Patrol

Ever wondered how Hema maps are made? We had a chat with our fieldwork guru Bryce to ask how the...
Read More

Hema Maps today announced it has signed an agreement with Rooftop Maps to offer its highly regarded maps into Hema’s...
Read More