This jaunt around the northern reaches of Cape York requires good sand driving technique, and in the process rewards travellers with some secluded spots and visceral evidence of the region's involvement in World War II. The trek begins at Bamaga and heads about 8km southeast to the WWII crashed planes. Heading back into town, just after the DC3 wreck, you could take the track off to the south, but instead keep going to inspect the monument in Adidi St in Bamaga. A short diversion to the north takes in Seisia and its popular wharf.

Head back to Bamaga then continue through to Umagico and Injinoo, in general tending south on the Bamaga Rd until you see the well-signposted track to the west to Mutee Head.

Slightly before you reach the head, there'll be another track off to the left. Up to now, you wouldn't even need to be in a 4WD, but this track out to the mouth of the Jardine River and Mutee Head South demands high clearance and a very torquey engine. Soft and sandy and very narrow, the track winds in and out between trees, probably necessitating folding your side mirrors flat. There are some great campsites close to the river and the beach, but watch the sand on the beach - it's really soft! 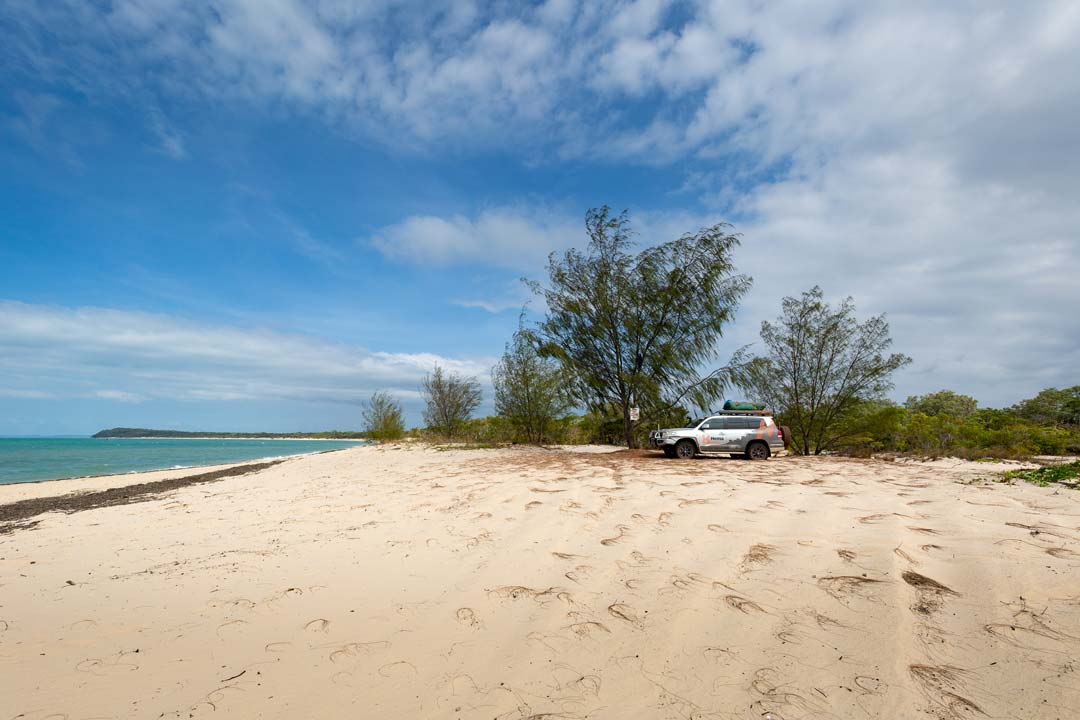 Backtrack and make your way back to Mutee Head North. Again, just before you reach that destination, there'll be another track off to the left beside a fenceline. At the top of the hill is Number 52 Radar Station, which operated for some two and a half years until the end of the war. You'll also see the concrete pads of gun emplacements. Injinoo people helped in the construction of this facility.

The monument in Bamaga commemorates the local Torres Strait Islanders who enlisted in the Northern Peninsula Area Light Infantry. By 1944, almost every able-bodied TSI man had joined up, ready to repulse the Japanese from the Cape should they invade. The men were paid only one third of what white troops received, and it was only after a short-lived 'mutiny' in December 1943 that pay was raised to two-thirds. Both the DC3 wreck and the Beaufort Bomber remains are easy to find, just off the track. Both planes are fenced off to preserve the wrecks, and there are plaques commemorating the dead. Simple signs lead the way to the wreck locations from the Bamaga Airport road.

Mutee Head, about 5km north of the river mouth, was the landing spot for Chief Bamaga and his people when they fled their Torres Strait island of Saibai in 1948. Their island had been swamped by a king tide so they headed for safety on the Australian mainland. For a few years they lived at Mutee Head, before moving inland to the present Bamaga site. A short distance inland from the beach is a small cemetery and a monument to the people who landed at this spot. During WWII the beach at Mutee Head was an important landing point for all forms of military supplies and a large military camp was based here. The ruins of the jetty jut out to sea, while further offshore a stand of pylons were probably the mooring point for tankers and the like. On shore a few blocks of cement, the occasional pipeline and the odd gun pit are the only reminders of those busy days. On top of Mutee Head itself, just south of where the main road reaches the beach, there is a radar tower and other associated defence works that can still be seen. There are also a few old gun emplacements closer to the edge of the hill that are worth a look too.

Besides satisfying your historical curiosity and enjoying great sand driving, there's always fishing, fishing and more fishing (watch out for the crocs though)!

The Cape in WWII

Almost the entire area of the Cape was involved during WWII. Most of the population of Thursday Island was evacuated as the place was transformed into a military base housing the HQ and the Commander's residence (near the Grand Hotel). Horn Island was heavily manned, Coen, Mitchell River and Lockhart River were all critical air facilities, and Portland Road (complete with coastal battery) and Iron Range were major bases. Bamaga's airstrip was hugely important, and was renamed Higgins Field in honour of RAAF Flight Lieutenant Brian Higgins, killed on ops in 1943. Warplanes that used the strips were mainly Beaufort bombers, US-made but RAAF-operated Vultee Vengeance two-seater dive bombers, and the USAAF flew B-24 Liberators.

After WWII the troops left and so did all of the logistical support: the jungle grew over the rusting radar towers and the concrete bunkers, white ants destroyed anything made of wood and huge termite mounds dotted the once important airfields. Interestingly, the Jardines abandoned Somerset in WWII, and never came back to live there.