Home / Iconic Destinations / Discover the wilder side of the Savannah Way with this selection of the best off-road camps available along the Top End's most iconic touring journey.

Discover the wilder side of the Savannah Way with this selection of the best off-road camps available along the Top End's most iconic touring journey.

West of Karumba, where the Savannah Way skirts the Gulf of Carpentaria’s croccy fringe, a string of unbeatable riverside camps lures travellers keen to get lonely for a while. Spiced with barramundi and mud crab dinners and remarkable Savannah scenery, this is one of the best journeys you can make across Australia’s far north.

A few hours drive out of Normanton, a long causeway snags the Leichhardt River sending it tumbling over an arcing limestone lip into the barramundi-filled pool at its base. Great flocks of sulphur-crested cockatoos bend the canopies riverside and travellers stake out the shady high camps that flank this deeply carved waterway. 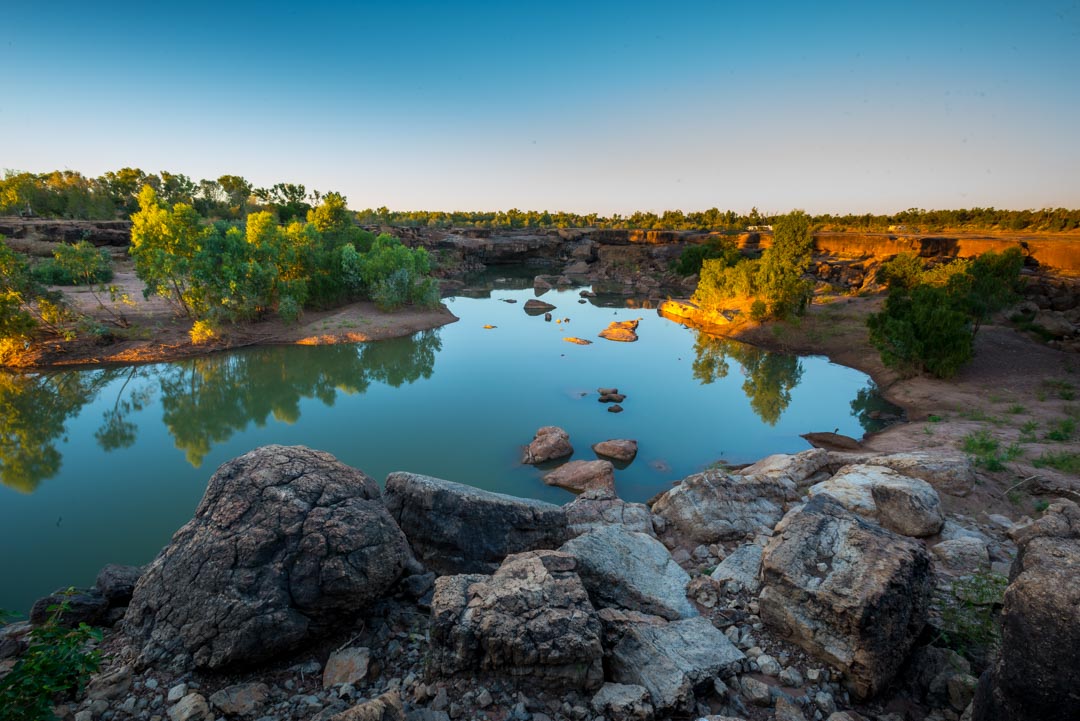 As the sun sinks low, anglers rockhop up and downstream in search of secluded fishing holes, collecting firewood and spotting waterbirds and the occasional crocodile too. The Leichhardt’s rustic riverside camps provide nothing but grand views but eagle eyes might discover the Aboriginal grinding slits while exploring the exposed river bedrock near the causeway.

Considered to be in near-pristine condition, the Leichhardt River winds for 621km from Rifle Creek to the Gulf of Carpentaria and contains prehistoric fossil remains, including that of an unidentified ancient marsupial unearthed in 2011. This camp is one of the best on the Savannah Way and although the possibility of estuarine crocodiles means the deep pools beneath the falls are off limits for swimming, it’s here that you might catch a barramundi or two.

Just 25km from the coast, Burketown is famous for exactly two things: superb barramundi fishing and the spectacular Morning Glory clouds that sweep across the Gulf from August to October.

Catching a Morning Glory is a bucket-list sight and when conditions are right, these two kilometre-long tubular cloud formations roll in at first light, spanning the sky and attracting gliders who ‘ride’ the Morning Glory like a surfer catching an ocean wave. 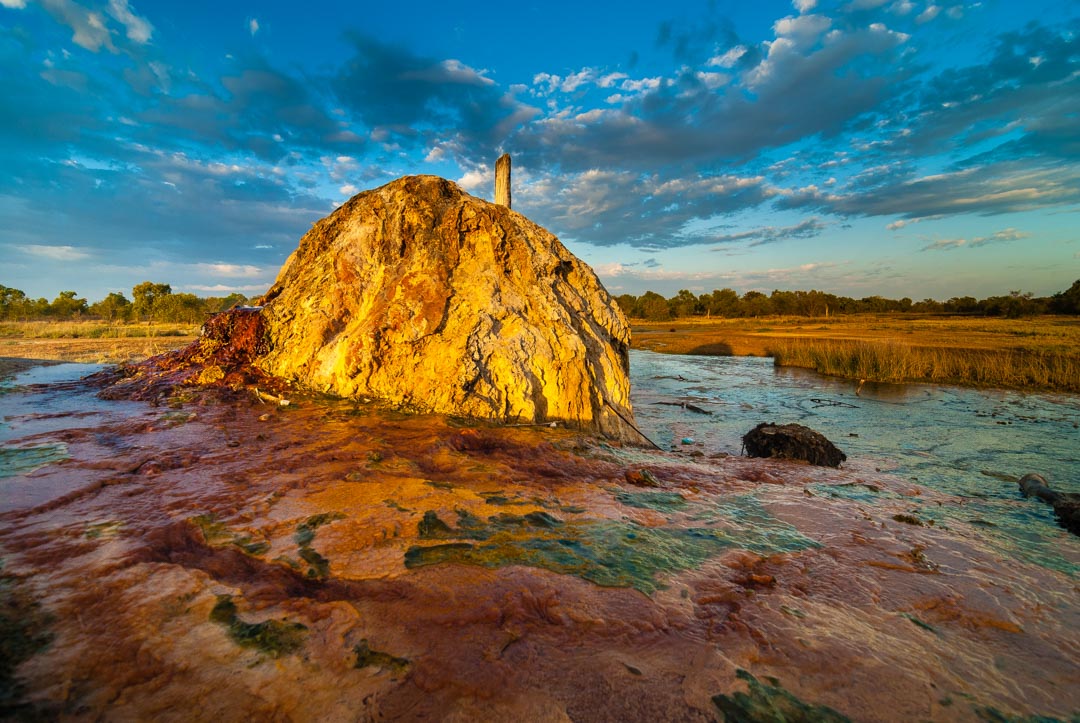 Throw in the chance to snare a couple of fat mud crabs and you’ve got enough reasons to spend time camped on the Albert River’s shady banks. Feeding Burketown’s reputation as the barramundi capital of Australia are the lush wetlands downstream, accessible to travellers with a tinny in tow who can fish 25km to the sea and come back with catches of mangrove jack, trevally, queenfish and coral trout too.

Traditional Gangalidda Garawa owners charge travellers $35 per vehicle to camp by the river ($50 for two nights), payable at the Burketown Visitors Centre. Arrive over the Easter long weekend to join the World Barramundi Fishing Championship or in July to catch Burketown’s annual rodeo.

Bulging sandstone buttresses and crumbling canyons rise above the Savannah plains as travellers approach Hells Gate for the steep border crossing onto the NT’s Barkley Tablelands. For early settlers, Hells Gate was as far as police escorts would accompany them, forcing them to brave the NT’s high country alone and leaving them vulnerable to the fierce Indigenous tribes rumoured to roam beyond. Today the scenic route west dips to translucent, pandanus-fringed rivers and a top camp on the Calvert River where you can cool off in chilly cascades beneath a stunning limestone tufa waterfall stretching 100m along the eastern riverbank.

Constructed from layers of calcium carbonate deposited by the lime-rich water, fragile tufa covers the Calvert’s high bank and agile rockhoppers can climb to hidden spa pools just out of sight. Dunking yourself in the Calvert’s shallow pools is a delicious experience on this otherwise crocodile-filled route and is not to be missed! 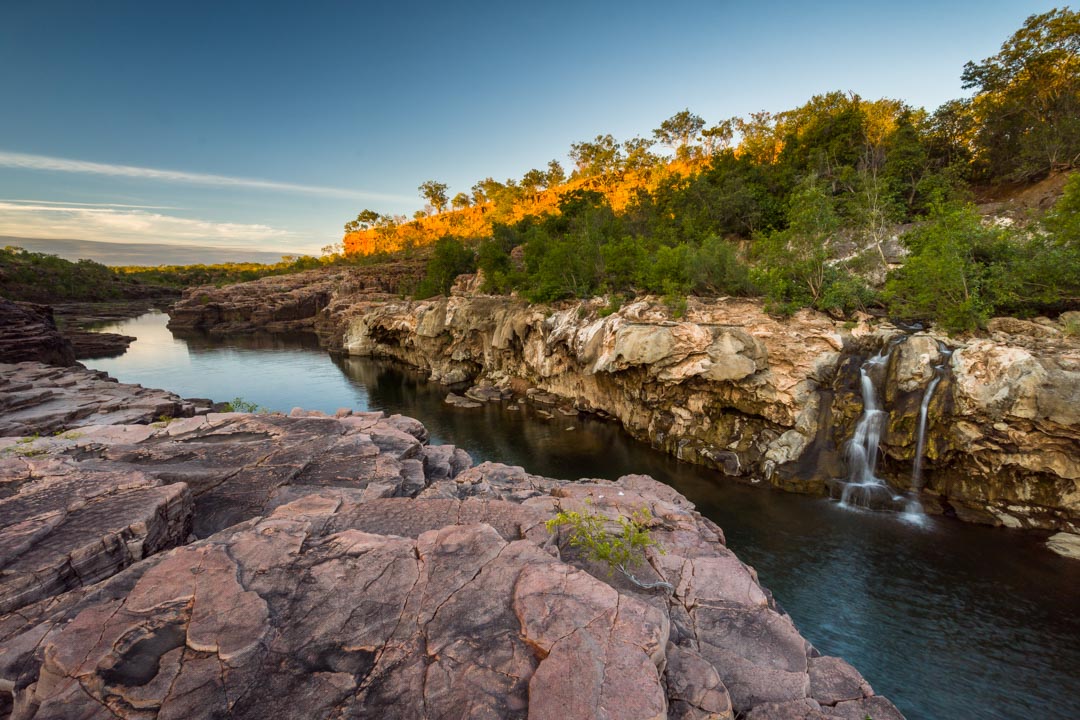 The Calvert offers campers nothing more than a spacious pull-off for the night but its tufa waterfall is a lovely find, making it my favourite spot to overnight on the bumpy run to Borroloola. If you stay, listen for the dingoes that roam the high cliffs at night.

From the Calvert River Borroloola is well within your sights, but a night on the magnificent Robinson River may well stall your arrival in town. Tucked amongst the pandanus where lofty gums throw shade over clear, fish-filled pools, a pair of campsites awaits those lucky enough to snare them. On our recent adventure we stopped at the Robinson mid-afternoon, nudging into one of the sandy camp clearings and spending time watching the birds as our neighbours reeled in barramundi and stoked their campfire for a delicious feed. They regaled us with tales of hand-catching a tiny freshwater crocodile the night before, and we dangled our toes tentatively while swiveling our heads and keeping watch. Like all riverside camps on this stretch, the Robinson River provides no facilities. Check road conditions before setting out at racq.com.au (QLD) and ntlis.nt.gov.au (NT).

Across the top of Australia is a road steeped in history and filled with opportunities to experience vastly different national...
Read More

Across the top of Australia is a road steeped in history and filled with opportunities to experience vastly different national...
Read More