Cape York Peninsula’s reputation as a last frontier for recreational fishers is a powerful attraction for the more adventurous angler. There are several options on offer. You can be independent and take your own boat, leave your boat at home and hire one when you get there, or take a charter. While the latter may seem like an expensive way to go, it wouldn’t be a lot more than the independent option once you take into account running and repair costs. Also, you won’t be wasting precious holiday time trying to find the fish, or getting stressed by the damage the bad roads are doing to your boat and trailer.

It’s probably fair to say that most visiting anglers are fuelled by the desire to catch a large barramundi. Growing to 30kg, this magnificent sports fish is noted for its aggressive strike, strong run and explosive leaps as it tries to throw the hook. Not only that, they’re good eating – particularly those caught in salt water. Barra can be caught off rocky headlands and in freshwater streams, billabongs, and estuaries, with the most productive period being mid-September to mid-May. Rinyirru National Park is probably the best place on the Peninsula to catch a barra. Sadly for most visitors, however, the barra fishing and holiday periods don’t coincide. Barramundi go off the bite when water temperatures drop in June, although live bait can still get results. So much attention is focussed on barramundi that there’s a tendency to forget that there are other fish in the sea. For starters, Cairns has developed an international reputation as a game-fishing centre. May to September is the season for small black marlin and sailfish – excellent fishing on light tackle – while September to December is the season for giant black marlin. It might take a while to save the price of a charter trip in pursuit of giant blacks, but the experience will almost certainly be worth it. Spanish mackerel – another popular game fish – hunt these waters in voracious packs between April and October. Mackerel can be caught around inshore islands, rocky headlands and jetties wherever there’s a current. Hot spots include the wharfs at Cooktown and Seisia.

Reef fish such as coral trout, red emperor, nannygai, golden snapper, jewfish, red bass, reef mangrove jack, snapper, spangled emperor and sweetlip are common catches around coral outcrops. Rivers flowing into the Gulf of Carpentaria generally have larger catchments than those emptying into the Coral Sea. There are numerous estuaries along the west coast and their remoteness and lack of road access have protected them from heavy fishing. Grunter, flathead, whiting, queenfish, black jewfish, threadfin salmon and barracuda are common catches around river mouths, with barra, golden snapper, trevally, black jewfish and mangrove jack being found further up.

Estuaries are the home of the prized mud crab (a.k.a. muddies). These can be caught in enclosed pots baited with fish frames and the like. Pots should be set on a muddy bottom around the edges of the mangroves when the tide is rising, and checked when it’s falling.

Freshwater streams are also the home of red-claw crayfish. These tasty morsels grow to 300g and can be caught in enclosed pots baited with tainted meat, rotten potatoes – anything, it seems, that is decaying. Red-claws don’t dig burrows like other yabbies, so you must set the pots around fallen trees and other places where they might be hiding.

Cherabin (a large prawn) are widespread in freshwater habitats throughout Cape York Peninsula. They can be caught in pots baited with fish frames or, in shallow water, by laying bait on a sandy bottom and throwing a cast net over it every so often. Cherabin are most active at night. They are excellent eating, either boiled or grilled.

Finally, while a boat greatly increases your options, there are many places where throwing a line from the shore can bring good results. These include the wharfs at Seisia and Cooktown, Archer Point near Cooktown, Chili Beach in the Kutini-Payamu National Park, Fly Point near Somerset, the beach at Bathurst Point, the southern bank of the Pennefather River near Weipa, and Evans Landing at Weipa.

Size limits, possession limits and closed seasons apply to many fish species, while the Great Barrier Reef Marine Park includes closed waters where all fishing is banned. Heavy fines await the angler who does the wrong thing, even if inadvertently.

Each year closed seasons for barramundi apply to all coastal waters and adjoining waterways. The east coast is closed from midday on 1 November to midday on 1 February. In the west a closed season applies west and south of the intersection of longitude 142°09′ with the coast. The timing of this closure depends on lunar and tidal cycles coinciding with spawning peaks, but is usually from early October to late January.

The entire east coast is subject to closed seasons for coral reef fin fish. There are three closed seasons, each of nine days, in October, November and December.

No licence is required for recreational fishing in either salt or freshwater habitats throughout Cape York Peninsula.

The best known fishing spot in Cooktown is the town wharf, where Spanish mackerel, barramundi, bream and many other species can be caught in season. It’s a sight to behold when the Spanish mackerel are running, with anglers standing literally shoulder-to-shoulder for the full length of the wharf. You can imagine the fun and games when someone hooks a big one.

The old bridge over the Annan River, about 8km out of Cooktown on the Mulligan Highway, is reasonably consistent for barra, trevally, mangrove jack and bream. Quarantine Bay, about 8.5km by road south of town, can yield a variety of species such as whiting, flathead, trevally, mangrove jack and barra. The idea is to cast off the boulders north of the parking area at high tide. Despite the crocodile warning signs this is a popular swimming beach. 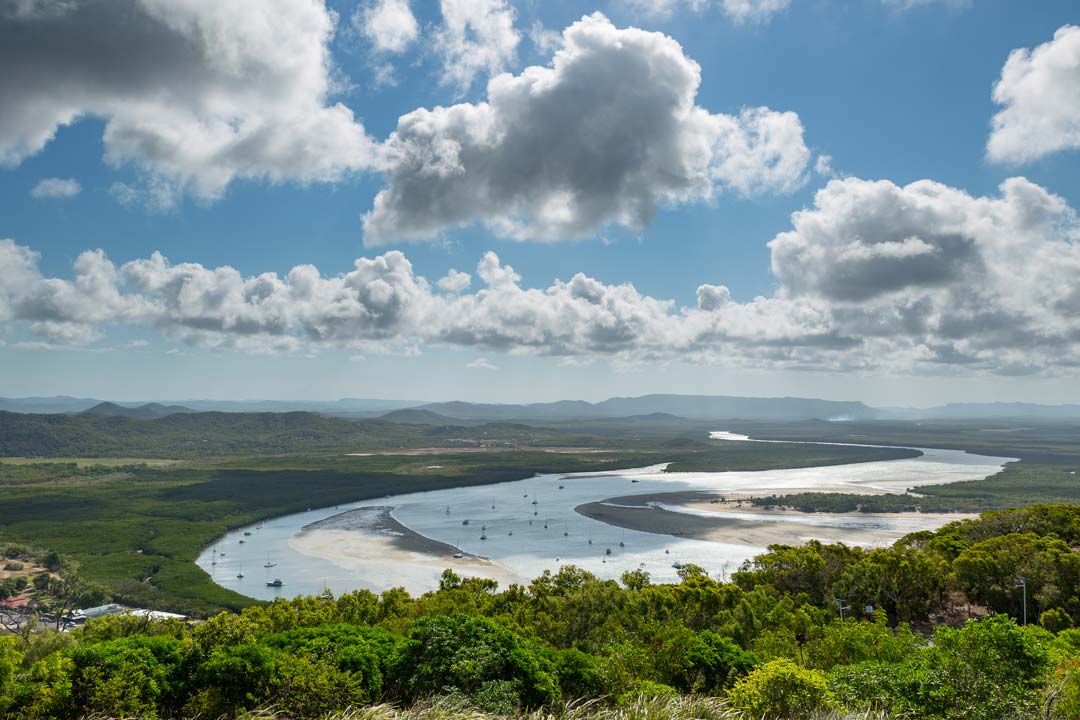 Further out again, casting off the old WWII groyne and wharf at Archer Point is worth a try for species such as mackerel, barracuda, trevally and queenfish. If they aren’t biting at least you can enjoy some magnificent scenery. The 13km access road is unsealed – beware of gutters at creek crossings. (For more information contact the traditional owners Yuku Baja Muliku 07 4069 6957 or www.archerpoint.com.au.)

Rinyirru (Lakefield) offers recreational fishing in both freshwater and tidal habitats, and this activity is permitted wherever there are designated campsites. The most common catches in fresh water are barramundi, sooty grunter, catfish and cherabin, while tidal waterways yield barra, grunter, mangrove jack, threadfin salmon and mud crabs. The critically endangered spear-tooth shark occurs in the Bizant River’s freshwater section and possibly elsewhere in the park – be gentle with any shark you catch and immediately return it to the water. Car-toppers can be manhandled into the water in most places, but there are only three spots where trailer-boats can be launched. These are Kalpowar Crossing, Annie River in the park’s far northwest corner and the Bizant River. The latter provides the best boat access to Princess Charlotte Bay, which is inaccessible by road. Canoeing is not recommended due to the park’s thriving population of large and hungry crocodiles. Rangers ask that boat speeds be kept down to avoid stirring up the water and eroding the banks.