One of Cape York's best beach camps (and also one of the closest to Cooktown), Elim Beach is renowned for its stunning Coloured Sands, which are a short drive from the campsite. Rich in marine life and picturesque views, this well-shaded spot has a toilet and showers, and requires a booking prior to arrival. Northeast of Musgrave is Cape Melville National Park, which is an open expanse of scrubland, rocky ranges and sweeping savannah interrupted by pristine coastline. Traversable by technical 4WD tracks that cut through the park, the Bathurst Bay camping areas – Crocodile, Oystercatcher and Wongai – punctuate this remote stretch of coastline, giving you the chance to bush camp in quietly beautiful surrounds. Chilli Beach is one of Cape York’s most popular beaches, its long shoreline characterised by coconut-laden palms that blow in the ever-present breeze. Accessed by Portland Roads Rd from north of the Archer River Roadhouse – or via Frenchmans Track for the adventurous – Chilli Beach is home to 25 sites, and those sheltered from the elements are rightfully coveted by those who complete the journey. Journey through the thick jungle of Jardine River National Park to reach the tall bauxite cliffs of Ussher Point, as well as some of Cape York’s most spectacular beach campsites. Overgrown and wild, this region is one of the most remote areas of the Cape, though if you’re adventurous and self-sufficient, Ussher Point’s two bush camps are a more than adequate reward for your preparation. The Tip of Cape York holds more than just the northernmost point of mainland Australia – it’s also home to some truly excellent beach camps. Part of an equally impressive drive that encounters a handful of beaches along the loop, the Nanthau Beach bush camp delivers white sand and aquamarine waters to travellers who choose to stay. Remainders of Cape York’s 18th and 19th century history litter the area around Somerset, which was once a homestead run by the Jardine family. Aside from its historical remnants – including some stunning cave paintings in the area - Somerset is now home to a fantastic beach campsite, which includes a boat ramp and basic facilities, not to mention some vintage Cape York coastline. West of the Tip of Cape York is Punsand Bay, an idyllic destination with plenty to offer. Watch the sun rise over the Coral Sea and set in the Arafura Sea, catch fish in the creeks, onshore or offshore, and enjoy the comforts of an onsite restaurant, bar, kids activities and much more before retiring to your campsite or cabin. 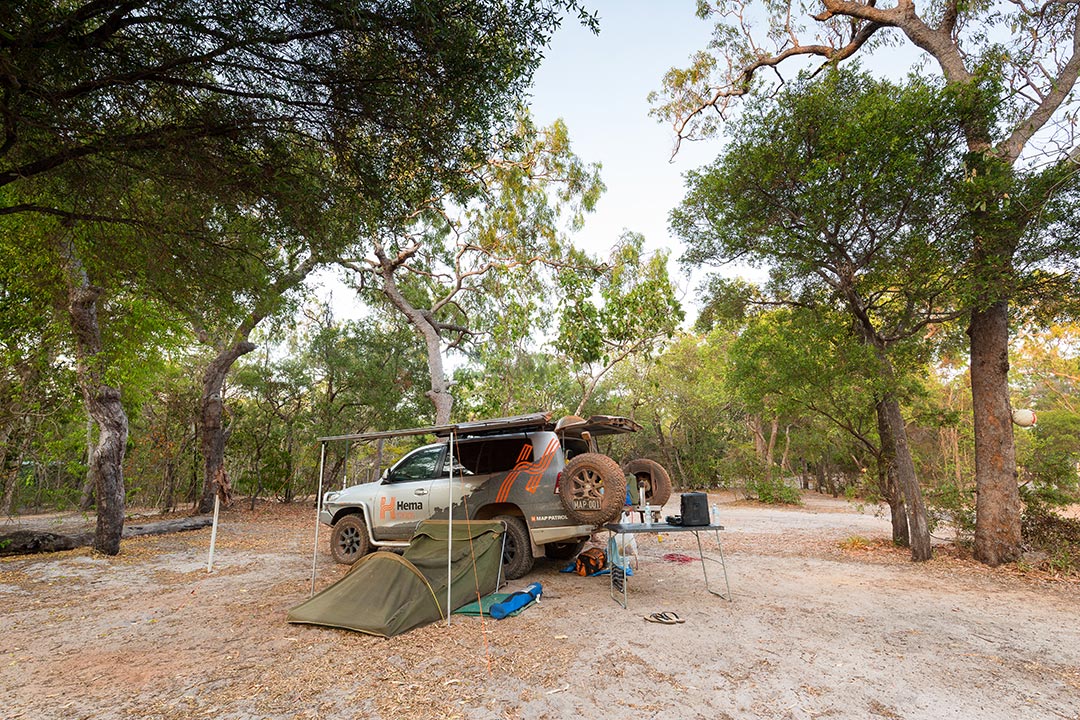 Heading west along the coastline from Bamaga is Mutee Head, a serene bush camp which was once a WWII site. The road in was originally constructed by the Americans during the war, but today this rocky headland is used by adventurous souls on the hunt for shaded campsites, stunning views and good beach fishing.