Home / Iconic Destinations / To help you plan the ultimate Kimberley adventure, here's our list of the very best destinations on offer in the wild Kimberley. Read more.

As one of the world's largest and most diverse off-road regions, the Kimberley delivers adventure travellers an endless supply of amazing locations to discover. To help you plan the ultimate Kimberley adventure, here's our list of the very best destinations on offer in the wild Kimberley. Mitchell Falls drops in four tiers with a total height of 80m, and makes a dramatic sight when the Mitchell River is running strongly. View this stunning remote feature with 3km walk from the camping area to the top of the falls or as part of a helicopter scenic fly over. The Wolfe Creek meteorite crater, which measures about 880m across and over 60m deep, is an amazing sight.  Unknown to western science until 1947, when it was spotted by geologists on an aerial survey and is today one of the Kimberley's greatest attractions. No tour of the Kimberley could be complete without a visit to the Bungle Bungle Range, the main feature in the 240,000 ha Purnululu National Park. The range includes thousands of sandstone ‘beehive’ towers that make up one of Australia’s most distinctive landscapes. Cape Leveque mashes together vibrant red dirt with azure oceans along its majestic coastline. With plenty of dusty tracks to drive and coastal camping, Cape Leveque is one of the most unique and visually stunning regions in Australia. Fissured grey-and-orange cliffs up to 90m high create a spectacular landmark. Nowhere else in the Kimberley are the deposits that make up an ancient reef as well exposed as it is here. Windjana Gorge is 3.5km long and has been carved through the Napier Range by floodwaters of the Lennard River. Located 35km from Windjana Gorge, the tiny Tunnel Creek National Park is centred on an underground passage that has been eroded beneath the limestone range by Tunnel Creek. The Tunnel Cave is about 750m long and 3-12m high, and you can walk all the way through it from one side of the Napier Range to the other. 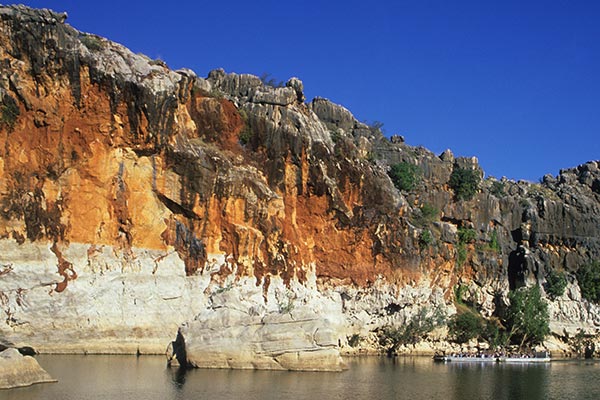 Geikie Gorge is a long, 30m-deep passage that has been carved through the junction of the Geikie and Oscar ranges by floodwaters of the Fitzroy River. Geikie Gorge is about 21km from Fitzroy Crossing and is one of only two national parks in the Kimberley that is accessible by sealed roads. Accessible from a moderately difficult walking trail, Bell Gorge is an idyllic location. After the walk brings you to the top of the falls, you can get to the plunge pool - where you can swim - by following the markers over the ridge on the far side of the falls. The setting for this unusual phenomenon is a narrow gap at the mouth of a large inlet in the Buccaneer Archipelago. At high tide the inlet fills, and as the tide turns, the water begins to drain out through the gap. During spring tides the rate at which the water is able to escape from the inlet cannot keep pace with the falling tide, so a horizontal waterfall is produced. El Questro Wilderness Park is full of must-do activities: head out on a boating trip through Chamberlain Gorge, walk through El Questro Gorge or soak in a thermal pool at Zebedee Springs. The park itself is situated in the heart of the Kimberley, but its self-contained nature makes it an experience all on its own. Image: Branco's Lookout. A promontory at the southern end of Cable Beach, Gantheaume Point