The Simpson Desert is close to the collective hearts of explorers all over Australia, its history and notoriety making it a golden reference on the resumé of any four-wheel driver.

Closed between December 1 and March 15, crossing the Simpson Desert takes a minimum of 4 days and demands low range and high ground clearance from your vehicle. The best time of the year is May to October, primarily for the purpose of getting far away from the soaring temperatures of a desert summer.

While in the desert, self-sufficiency is essential. Carry at least seven litres of water per person per day, and emergency food and water for another 7 days. Keep track of your fuel consumption too, taking into account that driving in soft sand increases fuel use by around 50% in diesel vehicles and can almost double it in petrol vehicles. Desert driving experience is essential and you should definitely carry traction aids. It's also important to remember that as of March 16 2014 sand flags are a requirement to drive in the Simpson Desert. Sand flags must be 300x290mm in size, made of fluorescent materials, and the flag must be 3.5m off the ground. For communications, scanning UHF CB channel 10 for approaching vehicles is another precautionary rule to abide by for safety going over dunes.

It’s important to remember that tracks are impassable when wet also, and there are fire restrictions in various regions and various times of the year.

The largest parallel sand dune desert in the world, the Simpson puts 1136 dunes in your path. Crossing it east to west is the most challenging, as the eastern dune faces are generally steeper due to the wind direction. The biggest dunes are on the eastern side of the desert, diminishing in size as a trend to the west. Wherever you choose to enter from, drop your tyre pressure and maintain low speed. This not only makes your own journey easier, but does so for those who come after you as well. As an example, the drive across the French Line and QAA line is the shortest, the most used and the most difficult route, for the simple fact that many of the climbs have been dug out from use. These signs of use are greatly increased when travellers don’t adequately deflate their tyres and drive at consistent speeds, however with some pre-trip desert vehicle preparation these churned sections are negotiable.

The shortest and most used route across the Simpson Desert can also be the most difficult to traverse due to traffic volume. There are a number of large dunes to cross and many of the climbs become degraded in the course of any given season. Another major route is the Rig Road, which is the longest and most southern route across the desert, and was once the easiest trip before the clay on top of the dunes eroded. The Rig Road was originally built to allow trucks to access the oil exploration area, so it's a better option for larger vehicles; the track also retains a strong feeling of remoteness that can be missing from the French Line in the peak season. The WAA Line is less trafficked than the French, and also has less corrugations with which to contend. The dunes are also lower, but are often more technical as they can have double dune crests. The WAA leaves the Rig Road where the Colson Track strikes north and heads directly east, crossing the Erabena Track before meeting the Knolls Track. Most travellers then head north to meet the French Line. 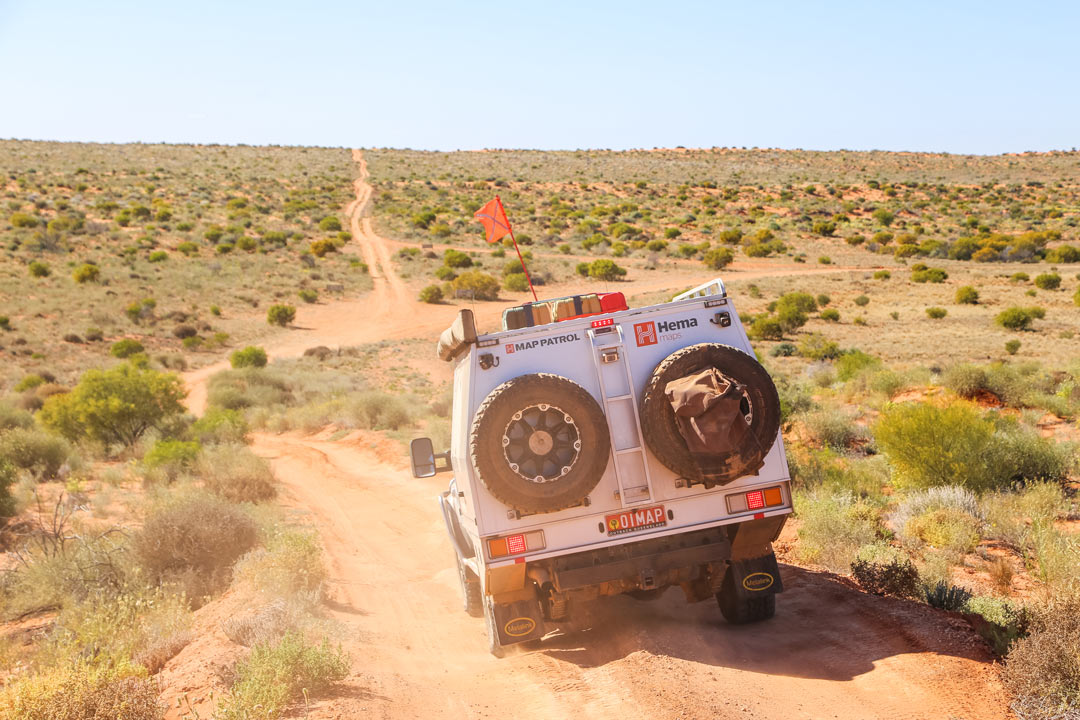 Another option, which is an easy run south between the dunes from Poeppel Corner to the Rig Road-Warburton Track junction, is the track called the K1 Line. The Warburton Track itself is used for access from the Birdsville Track to the Rig Road-K1 Line, though it can be put out of commission when it’s flooded. This track starts at Numery Station about 120km east of Alice Springs, and ends where it joins the WAA Line, A permit from the Central Land Council is needed to cross the Aboriginal Land.

The most remote route across the Simpson Desert is the Madigan Line, which cuts across the north of the desert and follows Cecil Madigan's route from his 1939 expedition. It links the Hay River Track in the east and the Colson Track in the west, with most travellers opting to drive west to east to make driving over windswept dunes easier. Getting prepared for the Simpson Desert

Being prepared pays dividends in remote areas such as the Simpson Desert, with many fated expeditions in years gone past a stern reminder of that. From Aboriginal explorers through to the early European settlers and up until now, the Simpson has resided in the hearts and minds of lovers of Australia’s red centre; so make your addition to that proud history a memorable and safe one.